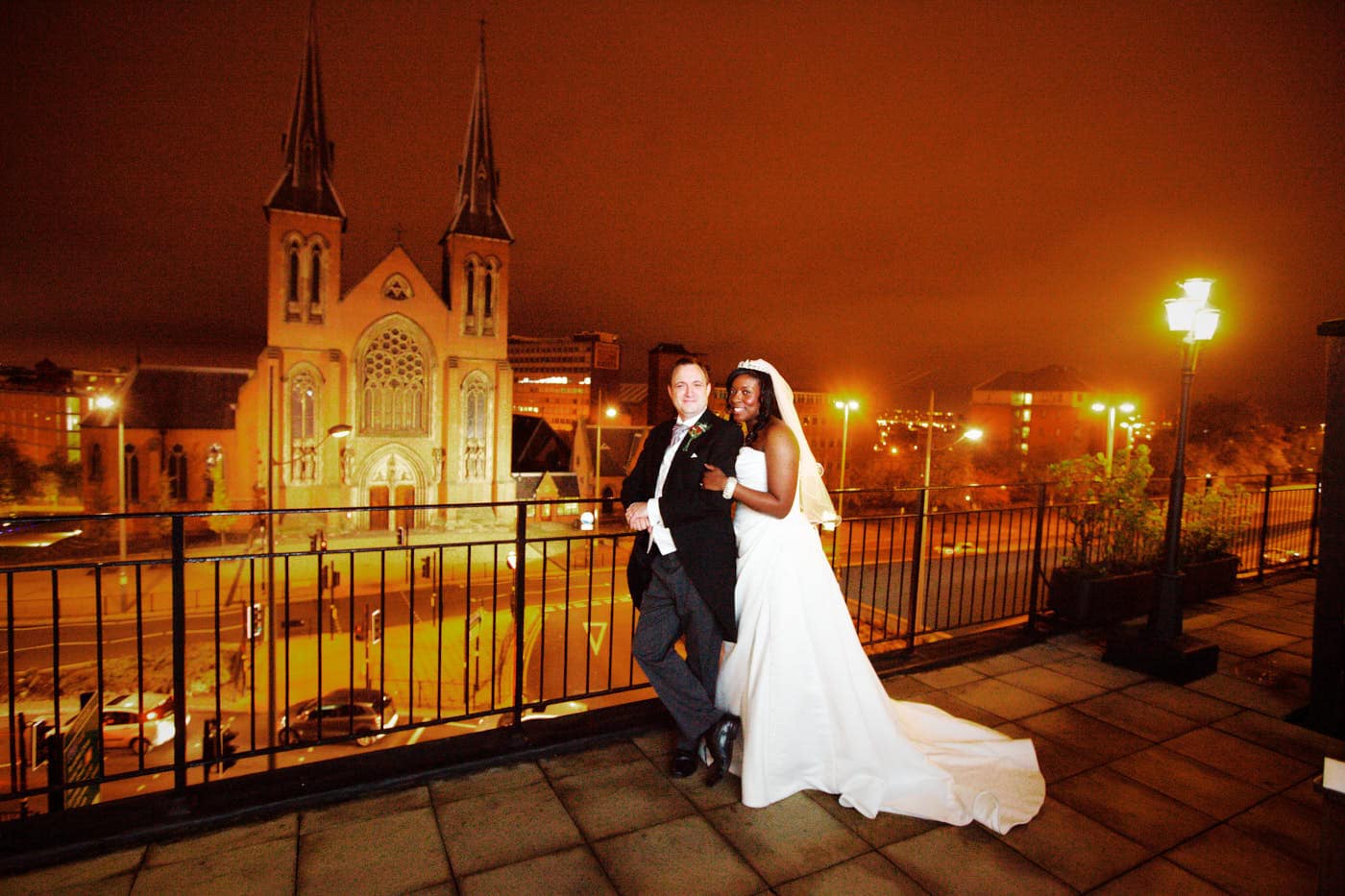 What a great, lively wedding Marverine and Austen had! What a privilege to be there to see and record it all for them too!! I’ve know Marverine for a few years, having taken quite a few photos for her professional career. So to able to also photograph another chapter tin her life was another honour.

Their wedding was held as the grand St Chad’s Cathedral church in Birmingham. This interestingly was the first Catholic Cathedral built in Great Britain in 1842 following the Reformation of the 16th Century and is now the Mother Church of the Catholic Archdiocese of Birmingham.

I especially loved their wedding reception where they had a comedienne, the had a lively first dance with a surprise routine half-way through out. Austen even joined his band and played for everyone.

But the photos will tell the story better than my words, so here’s a few of my favourite images. Followed by their wedding in the words.

Their Wedding Story in Their Words

How He Proposed: He took me out for dinner on the 3rd anniversary of our very first date to Bank in Brindleyplace in Birmingham. After dinner we went for a stroll around the place, then he got down on one knee near the fountain and produced a gorgeous diamond and platinum ring. A complete surprise.

First Dance Song: Mash up of Frank Sinatra’s I’ve Got You Under My Skin and Lethal Bizzle’s POW. Austen and I doing busting our best funky chicken moves was a sight to behold!

Cake: Fiona Cairns (who made Wills and Kate’s wedding cake)

Unique Details: Vintage bags of sweets as favours by Emily’s Best, We are huge fans of real ale so we brewed our own Wedding Ale, which was served at the wedding breakfast. We had our own cartoon designed for our special day which was used as the real ale bottle label, on place cards, menu cards and the table plan. Our friends are in a band called Billy Whizz they played a 40min punk rock set, and our terrific comedienne friend, Annette Fagon did a family-friendly stand-up routine for all our guests too.

Marverine’s Answer: Groom being the support act for the band, Billy Whizz. He writes his own songs under the name Offal Club, so donned his Rickenbacker guitar and belted out some tunes and then joined Billy Whizz on a couple of songs too. Totally brilliant!!

Austen’s Answer: Standing at the end of the aisle as the organ played ‘The Arrival of the Queen of Sheba’ as Marverine approached. Both the gravity of the situation and the grandeur of the Cathedral hit me! I kept my resolve and didn’t have a sneaky look back at her. When she drew level with me and the veil was drawn back, it took my breath away. She looked fantastic – and well worth waiting for! 🙂

Place: We had a mini-moon in Dublin staying at the Fitzwilliam Hotel on St Stephen’s Green

Make sure your Wedding Co-ordinator attends on the day of the wedding because handing over to someone else can prove difficult, as we found out 😉