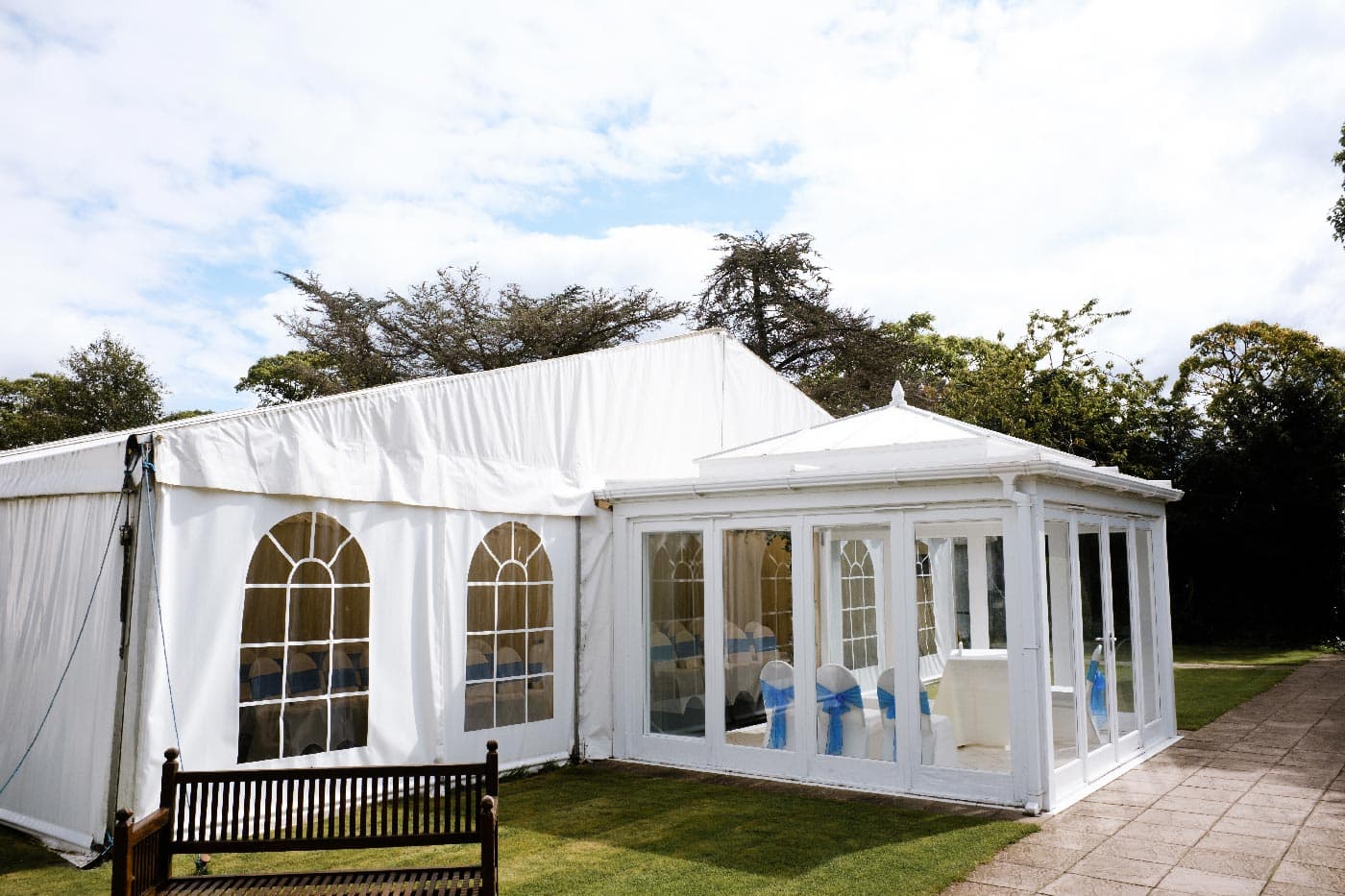 NB: Use the details above only as a guide. Please double check with the venue as details can, and often do change.

Situated in Stoke-on-Trent, Staffordshire this quaint farmhouse is set among beautiful gardens offering both indoor and outdoor locations for a unique ceremony.

Through the iron gate you walk over the centuries old moat towards the farmhouse preserving the historic characteristics of this building. Crowned with unique gardens and a calming waterfall both featuring a stunning backdrop for your wedding photography.

Licensed to conduct civil ceremonies in the Panel Room of the Farmhouse which holds up to 36 seated guests, or in the summerhouse attached to the marquee which seats up to 250 guests.

There is a new outdoor pagoda, which is licensed for outdoor civil ceremonies accommodating over 250 seated guests on the lawn.

Inside the Marquee are carpets, starlight ceilings, lit chandeliers and furniture. You can add your own touches like decorations, table centres, bunting etc, all to suit your personal taste and style.

Windows provide natural light to filter through during warmer months giving a comfortable feel. During cooler seasons the marquee has heating within giving a cosy atmosphere.

For a more casual option, you can choose the hog roast, with vegetarian options available.

There are local accommodation options available for your out-of-town guests to stay in, and Park Hall can supply details concerning which are recommended.

You can enjoy your wedding night in a nearby self-catering cottage or a comfortable bed and breakfast accommodation.

If you prefer caravanning or camping you are welcome to do so on the venue’s grounds.

“I have had so many compliments on the photos and yourself. Everyone saying how lovely you were and a few commenting saying you were like a ninja, coming out of nowhere to capture the perfect shot.”

It had been a few years since I’d been to photograph a Park Hall Farm wedding. But everything seemed so familiar with this lovely venue with it’s grade II listed building dating back to the 1600s.

Having exclusive use of the grounds and marquee makes for a very intimate wedding venue location, even though it can hold up to 250 guests.

As the  emphasis for this wedding was a relaxing wedding celebration, and Tabby and Matthew didn’t fail to deliver.

During their drinks and evening reception there were plenty of lawn games and, the highlight of the day, a bouncy castle just for the kids…yeh right…and the adults too!!

You’ll see what I mean from the images later. Watch out for the wrestling match!

My Favourite Feature Of This Park Hall Farm Wedding.

I was so glad the weather decided to play ball for this wedding, as it’d be a shame to not be able to use the outside features of Park Hall Farm to their full, and boy did I enjoy using them for this wedding!

With so much going on, I was allowed to simply wander around looking for story telling images that captured the spirit of their wedding day. As a result I was able to make the most of the different lighting in the different areas of this venue.

Because the main house has lots of dark panels, as Tabby spoke to the registrar there, I adored the dramatic, directional lighting. It was setting the scene for the day ahead.

One of the best parts for me about this Park Hall Farm wedding, is the fact that there’s a field at the end of the main drive facing west. When the weather is just right, you get a beautiful sunset and the images taken during this golden hour are to die for.

Was the weather on point? Were the images to die for? Sure was!! Since everything went so well, I was so pleased with how relaxed and accommodating Tabby and Matthew were as we went for an evening walk-about to capture a few evening images. The resulting sunset images are amongst my all-time favourite I’ve ever taken!!

In conclusion, shooting this Park Hall Farm wedding was a dream. I looked for different qualities of light and found it in buckets loads!

I hope you enjoy my favourite images from the day.

How You Met: We met through a mutual friend of ours. When I (Tabby) started University, I was eighteen and met my best friend Sean who in his second year of uni .We then started living in a flat with Matt. I knew Matt for about a year or so before he invited me to his 22nd birthday party which was an all-nighter. I ended up beating him on Mortal Kombat in front of his friends and we kissed later that night. Still don’t think he’s forgiven me for that ha.

How He Proposed: We’d been together for about 2 and a half years and it was Christmas. Every year we get each other a card and I like to give it early, I always wrote things in there about our year and how much he meant to me. This one particular year, he didn’t give me a card early and said that i have to wait till Christmas day.

Christmas day came and I was wondering where this card was, his family came over and he then told me that I could have the card. When I opened it, it was this beautiful hand crafted owl card in a box and he’d wrote an entire paragraph explaining how his life had changed, how much he loved me and how he never wanted to be without me. He ended the paragraph with “oh and there is one more thing…” and as I turned around to find him to ask him what the one thing was, he was on one knee asking to marry me. I just collapsed and cried!

Jewellery/Accessories: I only wore jewellery that Matt had given to me. In particular, a necklace which he gave me last Christmas that says “love you to the moon and back”

Wedding Theme/Style: We wanted it quiet relaxed and country. It played out how we wanted it too!

First Dance Song: We had a mixture! We never really had a “song” and the songs we do have, we can’t really dance too! Me and Matt always dance around in the kitchen to Disney songs or silly songs so when we couldn’t make our mind up, 2 weeks before the wedding, we decided to make a mix and rehearsed a dance to it! We started with an instrumental of “Beauty and the Beast” to fool everyone which then went into “I wanna be like you” from The Jungle Book which then went into “Gangnam Style” from PSY which then went into “The Tequila Song” to which we did the dance moves from the original TMNT movie and we ended with “Keep Rollin” by Limp Bizkit! It went down a storm and we have no regrets. It was just us.

Decor Elements: To go with the country style, we just had wood logs, twine and kept things simple. Between me, Matt and our best friend Chris, we made the centrepieces from scratch. Months ago they were just empty blank mason jars with an idea!

Unique Details: The centrepieces were made by hand as mentioned above. It did take us a while to complete but we had so many compliments on them and they are now nice around my home in different places. Some family members even asked to take them home. That was nice. We also themed the favours to the table. For example we had a table called “Neverland” so the favours were “Fairydust” (sherbert) and a lolly to dip in!

Tabatha’s Answer: Probably when me and Matt were exchanging vows. There was a look in his eye and I’ll always remember how he held my hands and softly caressed them with his thumb. After this moment, it would be when me and my mum got stranded on the bouncy castle after bouncing a bit too hard!

Matthew’s Answer: It was when I finally got to see Tabby walk down the aisle and then kiss her as my wife. I also enjoyed my time on the bouncy castle!

Place: We haven’t yet been on a honeymoon. Instead – we had a “Puppymoon”! The day after we got married, we went and picked up an adorable Siberian Husky puppy which we have both wanted since we were younger. We spent our time off training her and going on day trips around the UK.

Don’t get too stressed! It sounds so daft and it will happen but on the day, nothing else matters. If something goes wrong, if something isn’t just quite right, you can’t change it so don’t worry about it! I spent so much time worrying over the little things until i got to a point where I thought, as long as I get to marry Matt – nothing else will matter.

Matt, bless him, was as laid back as ever and tried to keep me as calm as possible. Your day will be perfect if you have faith in it but please remember to take it all in. You spend months, years planning this day and it’ll go by in a blink. I took this advice of somebody else and I’m glad I did. I went for a walk and just had some me time, me and hubby, away from cameras, away from everyone and just enjoyed the moment.

Looking for other venues?

If this venue isn’t what you’re looking for, or you’d like other similar venues to consider, have a look at the list of Best Wedding Venues in the West Midlands. There you’ll find 100+ venues where to get married, to help you decide on your perfect venue.

If you’d like to discuss your wedding plans with one of the most experienced wedding photographers in the region, fill in my contact form below telling me more about your wedding, and I’ll get back to you straight away.