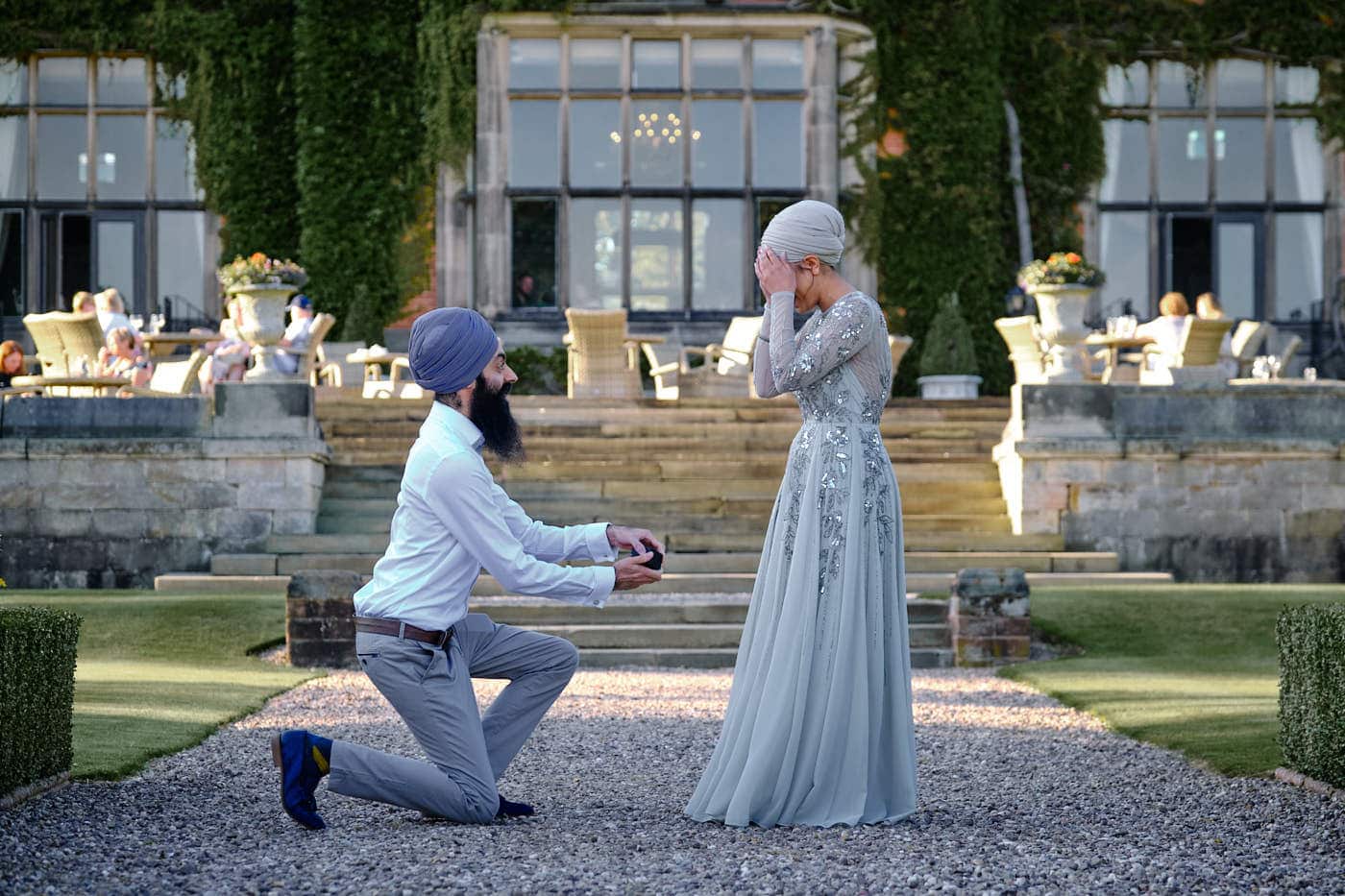 Can you believe it? I’ve had 2 surprise proposals to capture at Hoar Cross Hall within a few months of each other!

Let me tell you about the first proposal:

Just a few days before deciding to propose to Nikki, Prab got in touch and booked me to meet up at Hoar Cross Hall to capture the moment for him.

He had a lovely, simple idea. He wanted me to pretend to be a Hoar Cross Hall photographer taking photos in the garden area as they arrived in the grounds for a stroll around the beautiful garden. I was to approach them and ask if they’d mind me taking a few quick photos of the two of them in front of Hoar Cross Hall for the portfolio.

After taking a couple of photos, I asked Nikki to step forward for another pose, while Prab was a few feet behind her. This allowed Prab to get the ring ready as Nikki was concentrating on me. So all that left was for Prab to step forward when ready, and pop the question.

Everything worked so smoothly and the weather was glorious too, to add to the occasion.

Here’s Their Story in their Own Words

How Did You Meet?
Nikita & I connected on social media through some mutual acquaintances, when we quickly formed a close friendship. Over time our relationship grew stronger and from there we knew that we wished to spend our lives together!

Why Choose Hoar Cross Hall To Propose?
I always envisaged my proposal to happen with a magnificent building as a backdrop and Hoar Cross Hall provided the perfect background, it’s grounds are stunning and the house itself is full of character.

What Memories Will You Most Cherish About The Proposal?
Prab’s Answer: The surprise nature of the proposal made it really special. Thinking of a way to limit suspicion was quite exciting and Clive’s acting was flawless! I really appreciate the build up as we walked out the house onto the grounds as we approached Clive, who mentioned he was taking some shots for Hoar Cross, and was casually taking some pictures of the grounds. The whole set up is certainly the one thing I’ll cherish most about the proposal!
Nikki’s Answer:
The moment he knelt down and the feeling of disbelief that he was actually proposing! And I love how it was all captured via the photos.

Few months later, Aaron also wanted to propose to surprise the love of his life, Harpreet, by proposing at Hoar Cross Hall too.

So I thought, “If it ain’t broke, why fix it? Let’s use the same method of surprise as I used for Prab and Nikki!”

So Aaron too Harpreet to have a relaxing spa in the aft, and then suggested they go for a walk in the gardens before their evening meal. You’ll already know the rest of the story!

I just love the look of shock and surprise, along with the constant giggles of Harpreet as she realised what was really going on.

Then we went for a quick photo session to document their new status in life, with the ring being centre stage.

Congratulations also to Aaron and Harpreet!

Are you planning a surprise proposal either at Hoar Cross Hall or elsewhere?

Are you looking for different places to propose? Here’s a few more ideas for you.

“Who should propose first?” Attitudes are changing as more as more women are choosing to pop the question first. Here’s how Natalie proposed to Richard. 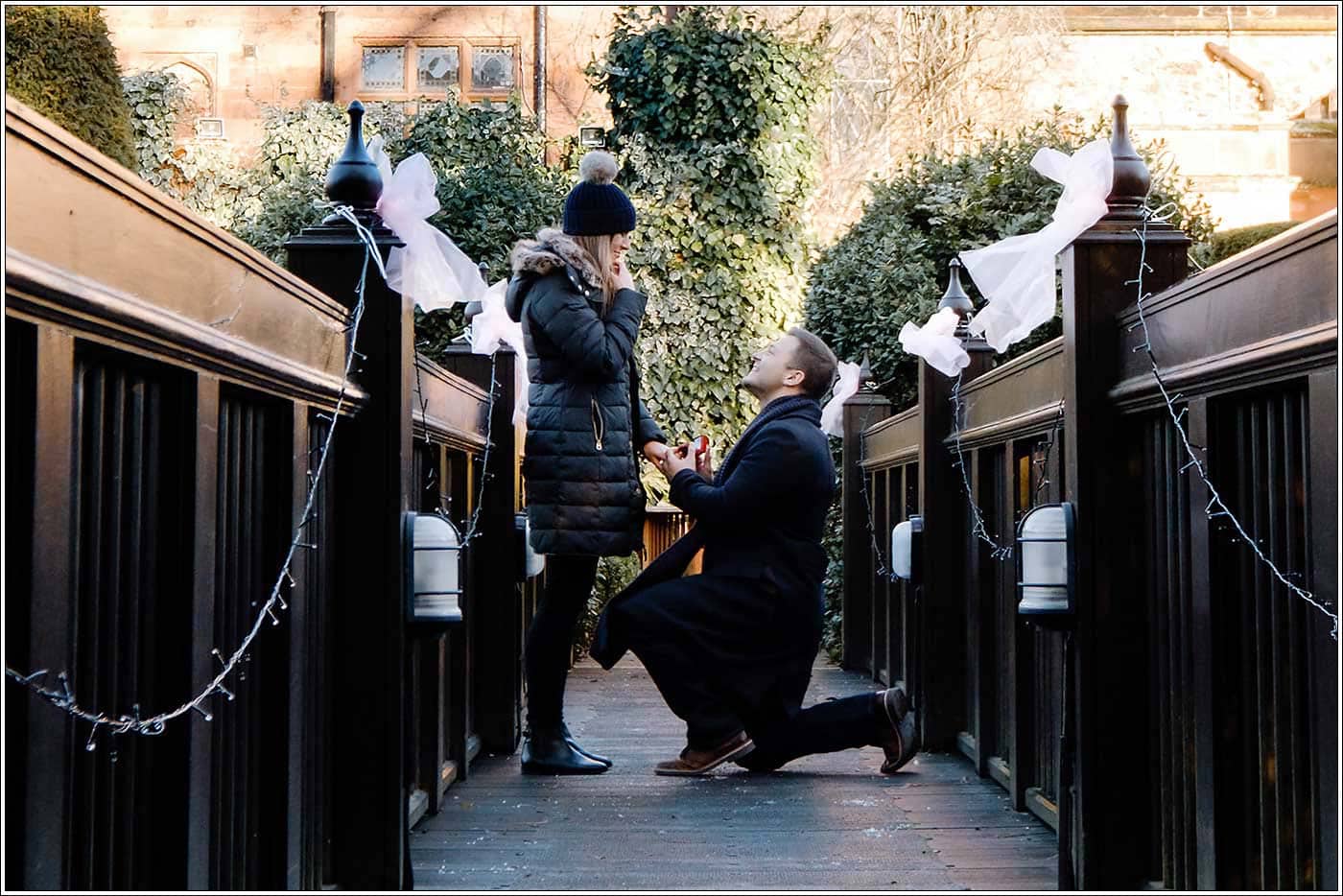 Guys, are you looking for simple proposal idea to ask the love of your life to marry you? Why not try what Rick did, who planned his proposal with me, even though he lives in America. Read how it all was planned 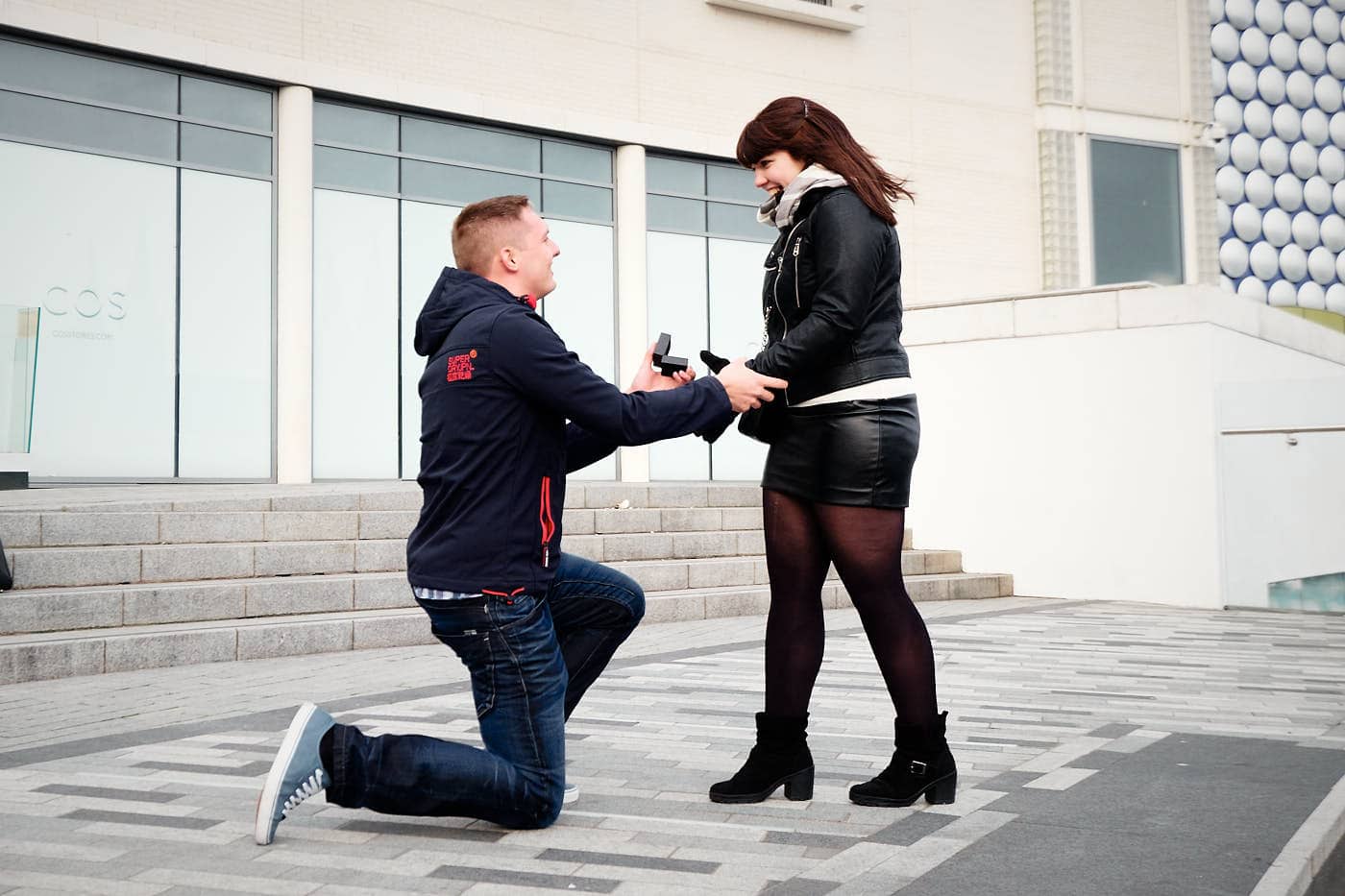 Surprise Proposal in Birmingham City Centre Guys: If you’re looking  for a some ideas on ways to propose to your girlfriend, how about following Jason’s lead who proposed to his girlfriend on Dec 5th 2015, based on a location that held precious memories for them both? Jason first booked me a couple of months before the date he’d chosen to…