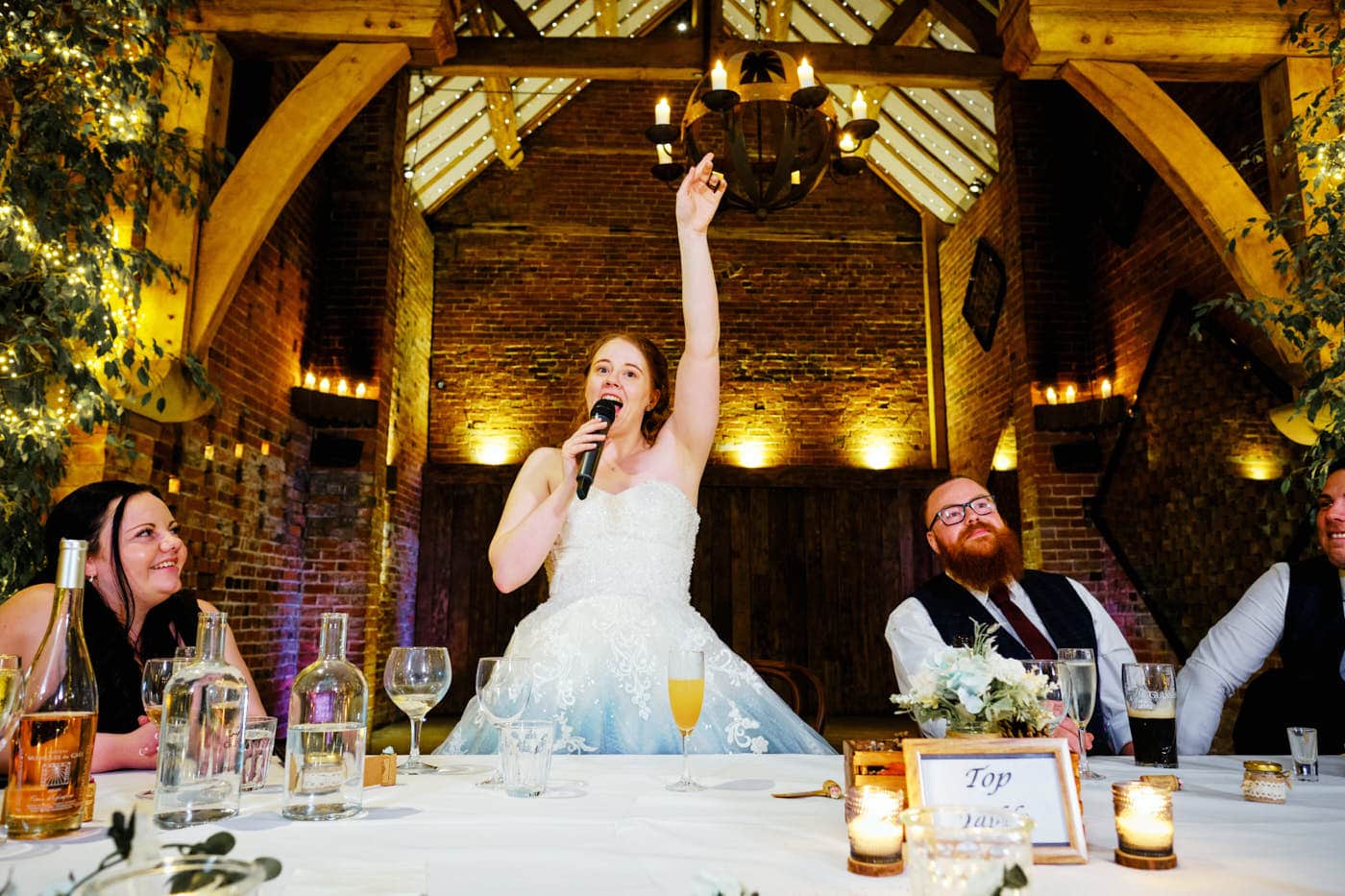 Wedding Speeches for Women and Men

Who Traditionally Gives a Wedding Speech?

When it comes to wedding speeches, there are certain traditions in the UK that most follow. First there’s a speech from the Father-of-the-Bride welcoming everyone to the wedding, and includes a welcome to the Groom to his family. He usually goes first as in many cultures it’s the father who pays for the wedding, and so because of this he is seen to be the host.

This is usually followed by the Groom thanking his new Father-in-Law for his speech and also allowing him to marry his daughter. Along with thanking both sets of parents and the rest of the bridal party (Bestman, Bridesmaids, Maid of Honour, Flowergirls, Pageboys and Ushers) Most importantly, he mustn’t forget to thank his bride for saying “I do”.

If there are any gifts this is usually a good time to give them out.

Then once the serious stuff is out of the way, the Best-man usually finishes the speeches by sharing a few funny, and usually embarrassing stories about the groom.

But notice anything missing? – Where are the wedding speeches by the women? In the US, I’ve noticed that it’s a done thing for women, especially the maids and maid of honour to also give a speech at a wedding, but not so here in the UK.

Many here in the UK still think a woman speaking at her own wedding is not ok. In fact, in a 2016 YouGov survey on wedding traditions, just 16% of people said a bride should speak at her wedding.

This is certainly a UK thing, as In Afro-Caribbean weddings it’s always been the done thing for anyone who feels brave enough, whatever gender or age, to give a speech, as the invitation is often extended out to any family and friends to say a few words to the happy couple.

So it used to be the case for British weddings that the only time, for example the mother of the bride would give a speech, would be as a substitute for her husband, who may have died or was unable to give a speech.

Over recent years from the wedding I’ve photographed, I’ve seen a definite shift away from traditional roles of men taking the lead in all things.

For eg. I’ve photographed a woman proposing to her fiance. So it’s no surprise either that more and more women are choosing to give a wedding speech, whether it’s the bridesmaids, the mothers of the bride and groom, female guests, and even the bride herself.

Sometimes the bride will join her husband so they give a speech together, while most often they’ll own it and give their own bride speech either after or before the groom.

Evidence shows that this pace has been accelerated by Megan Markle who ‘broke tradition’ and gave a speech at her own wedding.

Professional speech-writing company Speechy has revealed that they’ve seen a 420% rise in the number of speech templates sold to women since then. So now brides make up 16% of their business and they’re one of the few writing services that actively target female speakers and write wedding speeches for women.

So ladies don’t be afraid to have your say on your wedding day.

What Can a Bridesmaid Say in Her Speech?

Maid of honour or chief bridesmaid can thank the bride while complimenting the ushers / best man. She can share stories and anecdotes about her friendship with the bride.

She can include an introduction on how she knows the happy couple, with a word of thanks to them for inviting her to be part of their special day.

What about including a favourite memory, joke or sentiment that most guests will understand., or a few encouraging words or a thoughtful quote about the future for the newlyweds.

What Can the Mother of the Bride or Groom Say in Her Speech?

The main point of the Mother of the Bride’s speech is to welcome all your guests, and to tell her daughter how much she loves her and how proud she is of her. She can share stories and memories from her childhood and the present.

She can talk about meeting the husband for the first time, getting to know him and welcoming him into the family. Offer funny stories and advice for the happy couple.

What Can A Bride Say in Her Speech?

The Bride would want to make sure she isn’t just being repetitive by thanking the same people. The speech should include: thanks to her parents and to the bridesmaids.

She could include compliments / anecdotes about the groom – eg how they met etc.

It’s certainly appropriate for the bride to thank everyone for taking the time to celebrate the special day with them. Also thanks should go to the bridal party for their support.

Lastly you should thank your partner for choosing to spend your lives together.

When Should We Have Our Speeches?

At most weddings the speeches take place after the wedding breakfast, but some who are not adept at public speaking, choose before the meal because of nerves so they can “get it over with” and enjoy their meal.

Ultimately you can have your speeches whenever you like. It’s your day!

You can even hold your speeches between the main course and dessert, or after the dessert. This way your guests will be full, happy, relaxed and ready to have some fun.

Why not totally break with tradition and have your speeches during the evening reception? This is especially useful if you are having additional evening-only guests and you want all to be present when the speeches take place.

How Long Should Wedding Speeches Last?

I’ve heard so many wedding speeches for women over the years and my recommendation is to keep all of your wedding speeches to no more than 20 minutes. This is vital if your speeches are before the wedding breakfast, as having longer speeches will mean you’ll have hungry guests and the timeline of your wedding will be affected. The chef won’t be too pleased if they can’t serve the food at the prescribed time as the quality of the food will be degraded.

If you are planning to have 3 or more people speaking let them know that they have a time limit ie: 3 to 5 minutes each.

It’s common for a Maid of Honour / Bestman to give a speech but it’s not required if they have a fear of public speaking. What about asking the nervous person to pre-record their speech as a video message, and then play it on a projector screen for guests to watch?

The key to feeling relaxed is to write it down well in advance and keep practicing it.

As said you don’t have to follow traditions in the wedding, some weddings skip the speeches altogether.

But the important thing is to make time to thank guests for coming, and thank the wedding party for their help organising the wedding.

As the Bride and Groom are the guests of honour, it’s a nice touch to have at least one person from the couple to say a few words.

Successful wedding speeches require advance planning as, while impromptu speeches are nice, they’ll come across much better if prepared well in advance.

If you are called upon to give a speech, be sure not to talk about yourself instead of the happy couple. It’s their wedding day.

Plus it’s ok to get a little choked up, as while composure is great so is honest, heartfelt emotion so don’t hold back!!

If you enjoyed this little insight into wedding speeches for women and how you can make your mark, I’d love to hear about what you have planned for your wedding.

If you’re still looking for a wedding photographer, get in touch I’d love to document your bridal wedding speech!