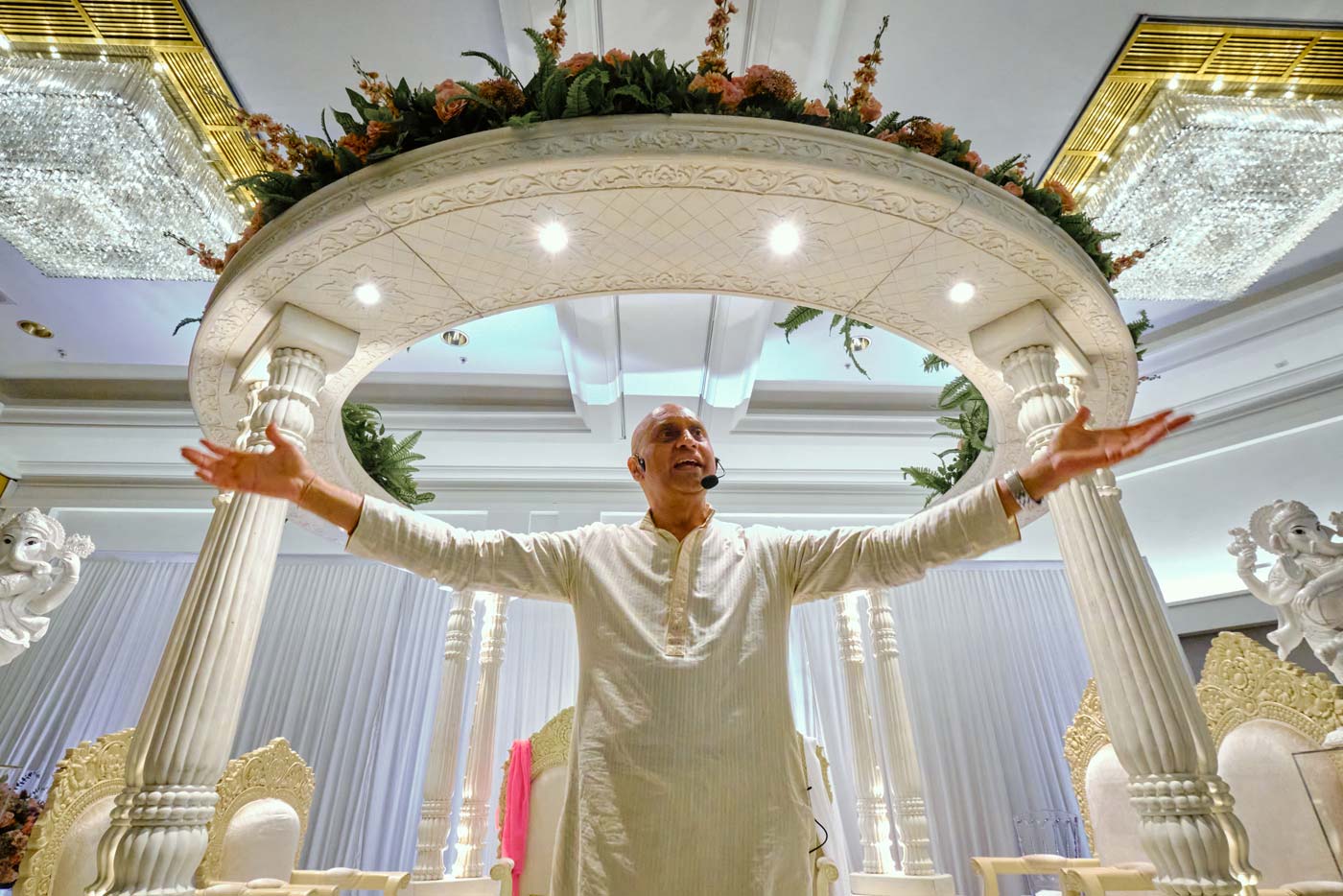 This was the 3rd and final day that Saras and Nehas have been building up to as they celebrated at 2 pre-wedding ceremonies at different locations.

Their first ceremony was their Sangeet ceremony, then the day before the wedding was the groom’s Haldi Ceremony.

My second shooter for this wedding was again Raphael Lionel Photography, who proved invaluable in helping cover different angles throughout the day.

Before the wedding, Saras got ready at the nearby Forest of Arden Hotel, which included the all important Sehra Bandi ceremony.

This involved the typing of the groom’s headdress in preparation for meeting his bride.

What Happens at a Traditional Hindu Wedding Ceremony?

If you’re not familiar with the different parts of a Hindu wedding ceremony, here’s a summary of what happened at their wedding.

The groom officially arrives at the ceremony site to be formally greeted by the bride’s family. This usually involves more lively music and much dancing.

At some weddings, the groom arrives on a ceremonial horse, elephant or chariot, or many modern grooms choose a sporty car. But as there was no room inside the hotel, a dhol (drum) procession and jubilant dancing more than made up for the lack of a live animal to carry the groom to the milni ceremony, when he meet his new in-laws.

It was fun to see a dance-off between both families as the groom and his family were welcomed by the bride’s family.

The priest then welcomes everyone and introduces the family and welcomes the groom and the bride to the ceremony.

Then comes the all-important wedding ceremony.

Next to the canopy (mandap, vedi) the bride and groom acknowledge and greet each other by garlanding one another, witnessed by all guests present.

Madhuparka – A Mixture of Honey

Madhuparka is a mixture of honey and yoghurt. It’s believed that honey symbolises the sweetness in life and the yoghurt the strength. This will be offered by the bride to her groom, who will eat the mixture three times. They will then give a promise to each other of sweet behaviour and manners in life.

Kanyadaan – Giving Away their Daughter

The bride’s parents will place their daughter’s hand into the hand of her groom and he will graciously reply by accepting his bride’s hand.

Two pieces of scarves (dupattaas) are put on the shoulders of the couple and a knot is tied between the scarves. This knot is a symbol of an unbreakable bond between the couple.

While holding each other’s hands, the bride and groom will accept each other voluntarily and of their own free will in front of all the guests present.

The bride and groom together will light the holy fire and everyone in the mandap (canopy) will offer a mixture of herbs and grains (samagri) into the fire. The priest will recite the verses in Sanskrit and everyone, under the instruction of the priest, will offer their obligations in prayer.

Laja Homa – The Offering of Puffed Rice in the Fire

All the bride’s brothers will be invited to the mandap and will be asked to put some rice in the hands of the couple, who in turn, will put the rice into the fire.

The couple will then walk around the fire for 4 times, symbolising:

b: Artha – For prosperity, economically and physically

d: Moksha – Blessing of the lord

The couple will take seven steps around the fire together. The steps symbolises:

g: Close union between the couple

Until now the bride was sitting on the right hand side of the groom, but after the seven steps they will exchange seats and the bride will now sit on the left side of her husband, so that she remains close to his heart.

The couple will feed each other little mithai (sweets) wishing each other a sweet life.

The priest will ask the gathering to stand up and shower the newly married couple with flowers while giving blessing to the couple. The newly married couple then will touch their parent’s feet for respect and blessings. Finally the priest will recite the peace hymn bestowing happiness and peace on the gathering and will invite the guests to come and give their best wishes, blessings and congratulations to the couple.

The vidaai, also known as bidaai, is one of the most recognisable parts of an Asian wedding celebration, when the bride says a final goodbye to her family after the wedding ceremony.

This is the final stage of the wedding, as the family finally acknowledges the end of the bride being their daughter, as she now begins her role as a wife in a new household.

You can understand why it’s always an emotional part of the day and needs to be treated with the respect that it deserves. So, while I wanted to document the story of this important part of the day, I still wanted to be as unobtrusive as possible.

This is where being a documentary wedding photographer comes into its own. Watching for the key moment. Quickly stepping in to capture the decisive moment, then knowing when to step back to allow them space and a sense of privacy.

As Nehas left the ceremony room, she was given flower petals to throw behind her, as her parents followed closely behind. Some brides throw rice or coins. Whatever is thrown, the gesture is to symbolise a repayment to her parents for all that they’ve done for her over the years.

Sometimes other things are included throughout the day. One of my favourites is Aeki-Beki, which is a light-hearted end to the formal proceedings.

After the wedding ceremony, the rest of the day will be similar to most western weddings, which features a brief photoshoot for the happy couple, cutting of the cake, a wedding breakfast meal, speeches, first dance, then the dance floor is opened for all guests to let their hair down and party.

Like What You See and Are Looking for a Photographer?

I hope you found my summary of the different parts of a Hindu wedding and pre-wedding celebrations useful, including an insight into how I naturally document weddings, to tell a real, uninterrupted and natural story of the day, without taking over with many posed images.

Maybe it helped you prepare for your Asian wedding?

If you’d like the same for your wedding, and you’re still looking for a photographer experienced in covering Asian weddings, I’d love to hear from you.