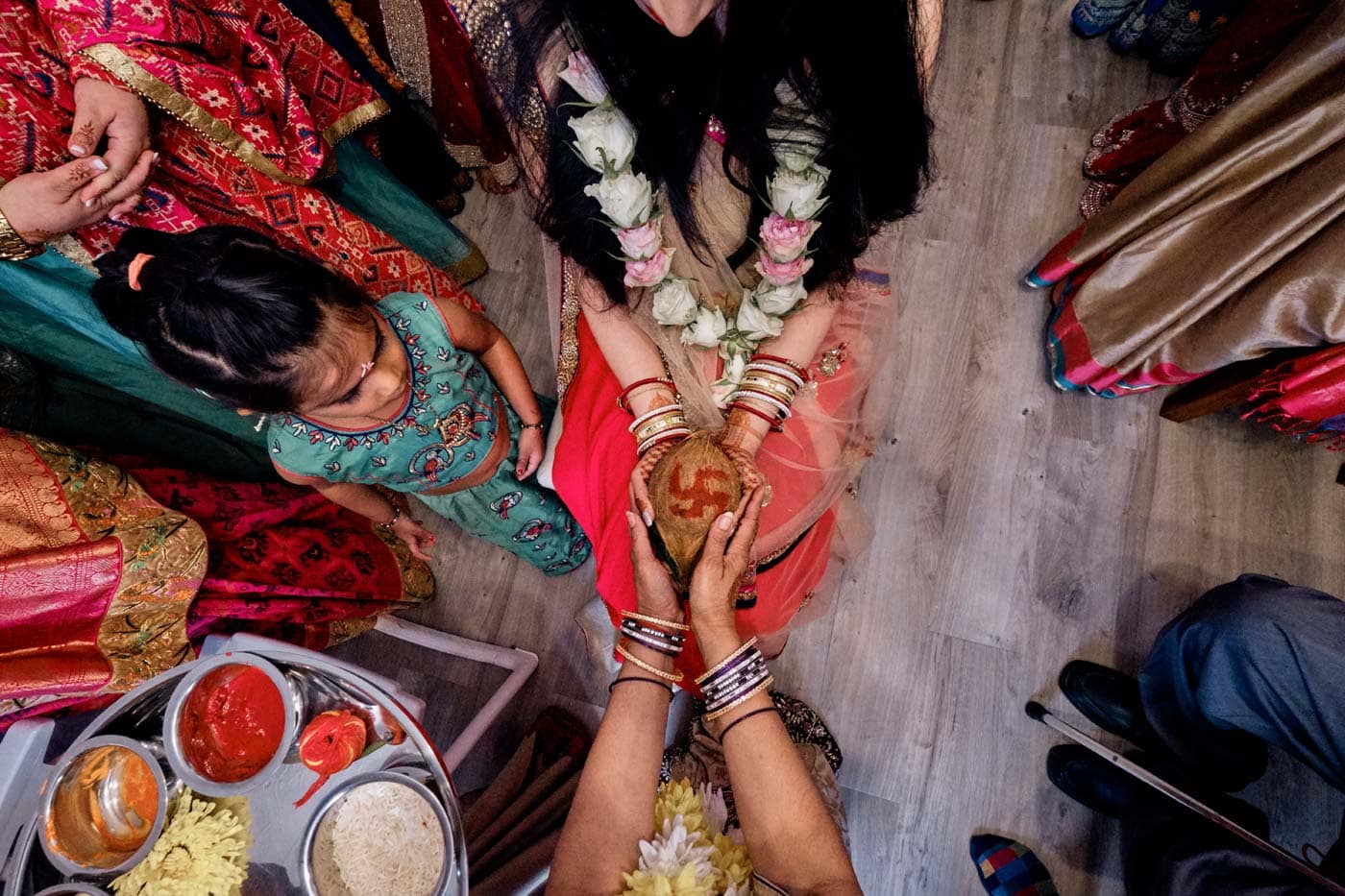 If you’re not familiar with what happens at a Hindu pre-wedding ceremony, it’s worth noting that before the actual wedding celebration, close friends and family of the bride and the groom have separate ceremonies, much like westerners have stag and hen parties. But that’s where the resemblance ends, as Hindu pre-wedding celebrations have a much more religious and traditional significance to them.

It was an honour to be invited to document both Jenika and Ravi’s Hindu pre-wedding ceremonies, as this part is usually a very intimate event, mainly for close family and friends.

While the actual events or order of events often vary depending on the bride and groom’s origins, usually Hindu pre-wedding ceremonies have a few common traditional features.

Both Ravi and Jenika’s celebrations revolved around  what’s known as “Ganesh Puja” to bless the proceedings.

Ganesh is regarded by Hindus as the one that removes all kinds of obstacles. Invoking his help is very important to Hindus.

This means, before any wedding ritual can start, the family worships Lord Ganesh, asking for his help to remove all obstacles, while also blessing the newlyweds with prosperity and happiness.

It was a privilege to be involved in this ceremony, especially as I’d already covered the couple’s pre-wedding shoot at Witley Court.

I came to realise that an important pre-wedding function is the Tilak ceremony (the application of a red paste of kumkum on the groom’s forehead). The purpose is to get a blessing from Ganesh, so Ravi can prosper in marriage and life.

Members of the bride’s family will also apply tilak on the groom’s forehead. This shows they’ve accepted him and considers that he would be a loving husband and a responsible father in the future.

It is also customary for both families to exchange gifts during the event.

Jenika’s pre-wedding Ganesh puja ceremony was held at her home, followed by a family meal together.

Like Ravi’s pre-wedding celebration, the event was overseen by a Hindu priest, proving the blessing for the family and especially for Jenika.

Part of the event involved paying respect to the older family members. This was a lovely gesture, as too often the older generation are a discarded and forgotten generation.

Are you planning to have your Asian or Hindu Pre-Wedding Ceremony documented?

I’d love to talk further and would love the opportunity to shoot more Asian pre-wedding ceremonies! Fill out my contact form and let me know what you’ve planned.